Getting To Know Our Colorful Neighbors

Well, there is never any boredom with regards to what we'll see every day. Every day when we open up our home we are sure to see leftover insects clinging to our screens from the night before. It's as if the party ended and they forgot to go home. There are always a few cicadas laying on their backs just waiting for a gentle tap to fly away. Small lizards eating small moths. Scorpion beetle with pincers looking like it escaped from the Mummy and Scorpion King movies. One insect looked like it was a cross between a lobster and a cockroach. We see praying mantii (?) clinging to the corners of our windows. Insects that look like green leaves hanging out on the patio. How about a brightly colored, jewel looking fly shimmering in the sunlight?  Or a curious looking small iguana hanging out at our jacuzzi, pool, and setting up home on our rooftop?

At night we have had a large raccoon stroll across our patio while we were cooking, seemingly looking for a dinner invitation.

Once the sun goes down the cicadas do their leg rubbing thing which is collectively, very loud. It usually lasts for about 20 minutes and then it quiets down.

Later it's a frog party in the jacuzzi with the most bizarre frog croaking that you've ever heard.

Toucans, sometimes 15 at a time, fill up the trees around us.

There's this one black and red bird, I think it's a Tanager, that hangs out with an orange and green bird. They fly back and forth together all day long. Someone told me that it's the male and female of the same species.

There are also pizotes that look like racoons that have reddish brown fur. We have seen them climb trees to get to the bananas.

Did you ever see a Walking Stick, also called a Juan Palo, bug?  It really does look just like a walking stick or a piece of vine before the flowers have grown. Verrrry interesting!

We have all types of ants. Red ants, leaf cutter ants, flying ants, army ants-not yet seen. By the way there are many insects here that look like they crawl or walk and then when you get close to them their wings open up, much like the Transformers, and they fly away-leaving you stunned.

That brown ugly beetle type even had 2 sets of wings.

We have spiders too. Golden Orb Banana Spiders that I have watched eat their prey and then what they don't eat they wrap it up and coccoon it for later. All this while the larger female's smaller mate looks on.  I also watched a silk spinning spider spin it's web.

After a rain we saw a few green and black poison dart tree frogs by our doorstep. We see large and small Blue Morpho butterflies that shimmer in the sunlight.

We have seen a few monkeys either a few steps up the road behind our house or further down the hill along the path.

We had been on the lookout for sloths. One of the workers here was telling me that up where he lives there is a sloth living up in the trees. When I asked him how high up in the trees, "for example, this high" I said while pointing to the tree that we were standing under. As we both looked up sure enough there was a sloth in that tree too.  Add that to my list of coincidences as are listed in one of my previous blogs. I proceeded to spend the next 2 hours photographing it's very slow movements. I had to wait about 45 minutes for it to stretch out to get the photo below. About 2 hours later it made it's way down and seemingly smiled at me as it slowly moved under some leaves.

You'll also notice a photo of what looks like a grey rock. That's actually some kind of insect carrying it's young-or a female and male having bug sex.

The fireflies here look very alien in their appearance. There are 2 lights coming from where you thing their eyes are. Then when they get ready for takeoff another light-green or red comes on. I think that is bizarre. When I tell the Costa Ricans here that fireflies in the US have lights coming out of their nalgas, or butts, they laugh and think that is bizarre.  I guess they both are now that I think about it.

There are many Vulture Hawks circling above on the warm breezes. At times they even circle a few feet above the pool checking things out. We are thinking about putting out a sign with a warning... "Do Not Leave Your Baby Unatended".  You all know about the Dingo. (No Dingos here).

One day we heard intense squawking going on in the trees above. There were 2 large green parrots battling each other.

I'm still waiting to see the fiery billed aracaris or cusingas. They are smaller relatives of the toucans and have different colorings. One of our landscapers hung a basket way up from a tree in our front yard. He tied it off so we can add fruit to it whenever we wanted to. I put bananas, 2 branches for them to perch, and even a Paradise Breezes mirror for them to see themselves. So far the only visitors have been butterflies and our iguana. The iguana jumped down from the tree and onto the basket. The basket opened up dropping the mirror down onto the vegetation. The iguana was still holding onto the basket until he too dropped down. Video on Sports Center's Top 10.

There are some hummingbirds around. I even had a close encounter with one-maybe it was even spiritual like those American Indian wildlife encounters. I stepped out onto the patio when I noticed a hummingbird come at me. It hovered right in front of me, no more than 2 feet away. It stayed there for what seemed to be for a minute but was probably only 20 seconds. Just looking at me as I was just looking at it. I heard the hum, but couldn't recognized the song.....ha ha.  It was a beautiful moment shared by both of us.  We will be planting more fruit trees and plants that will attract more when the rains start back up in April. I'll keep you posted if I wind up getting spiritual here. A little incense here, a little smoking weed there, mood music, candles.  Heck, I already have my disco ball and fog machine and tie dye shirt.

It took a while getting used to the sounds around us. At any time during the day or night you can hear a thud on the roof.  Don't worry, it's just small acorn like fruits that drop down usually when a bird is foraging around in the trees above. Also, you can hear the iguana walking around with it's little iguana feet. I'm thinking about putting little iguana booties on those little iguana feet to make it quieter.

We are learning the different sounds of the jungle and have become experts on recognizing the call of the Toucans. Tookie Tookie!  At night you can even hear the waves crashing on the beach down below.

We are even looking forward to the rainy season when there will be an even wider variety of insects, birds and wildlife. Oh my!

Coming Next.....Things That Are Not So Easy to Do Here 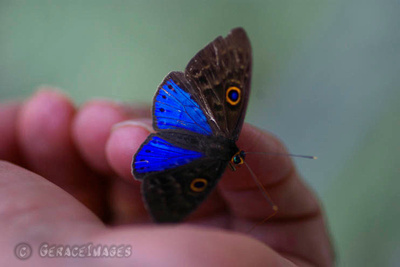